Entries which have aged off my main news page.

Thanks again for a great holiday season!  A certain amount of cynicism about Retailmas is entirely appropriate, but as a combined retailer and actual person, know that I'm always happy to see you.

And since I just realized I didn't announce it here, for completeness:

This year's factory seconds sale is on.


In other news, I set up gift certificates through Paypal:

When to order to be reasonably sure your package will arrive on time.  I can't make ironclad guarantees about what UPS and the post office will do, and that's especially true for international shipments, but here's my best guess:


Our last shipping day before Christmas is Monday the 23rd (cutoff at noon Eastern time!), and we'll be back in the office Monday the 30th.

I made a sculpture that comes in four pieces and assembles to make sort of a box.
I fused the glass inserts in a microwave kiln.  It was fun!  I rarely get to actually handle materials.

I don't have stock of this yet – just my proof – but I've ordered parts for more.  With these assembly pieces you never know till you get all the pieces together, but I'm having trouble putting this one down.  Which hopefully means it went well.

The squid has arrived.

A call for help — are you or do you know a web developer who's up to speed with modern HTML and would take a small contract job?

This site needs updating. The job will be to translate four or five representative pages into HTML5: semantic markup and get rid of the tables and all that. This isn't a redesign, the look will stay similar to how it is now. I'm looking for reasonable but not exhaustive browser compatibility, tablet-friendly and if possible mobile-compatible.

There's a little Javascript, bonus points if you can update that to current best practices. And there's some ancient Perl CGI scripts which I can remain responsible for. (Yes, I understand that I'm the last living Perl speaker.)

Thanks much! The time has come.

This is in the biomorphic line: I wrote an interactive creature builder for printing at Shapeways.

It uses WebGL, which means it won't work for some browsers (looking at you Internet Explorer) and some graphics cards.  It was surprising to me that this worked at all — I'd never have predicted that the way forward for client-side 3D rendering would be...Javascript.  It's not the jetpack I hoped for, but it's still recognizably the future.

I am working on an undertaking of great interest (to me) but no one to see it until it is finished.

All credit to Allen Lefever for electrons and photography!  Click through for luscious sparks.

Next Thursday, February 28, there will be Shapeways meetups in a lot of places.  I've offered to host the Cambridge, MA one, if you'd like to drop by poke the meetup page.

March 6 in Santa Cruz I'll be on this panel about local innovation: Innovation in Paradise: The Beautiful, the Effective, and the Frustrating.

In April I'm to speak at the e.g. Conference at Monterey.  Seems TEDlike but less tech more play.  Sorry I can't cut you in on it or anything, this is just FYI.

I rebooted this, in two parts held together by magnets.

It's now 20% cheaper, and a googolplex better.

I have this design in metal now:

I'm stoked.  I wasn't sure from the screen, but now that I see it in person, this is one of the good ones.

And the halfway point has its own charm:

In an old-school tetrahedral sort of a way.

I've been cranking them out at Shapeways.

A pair of related designs.  Hope to see some metal soon!

When to order to be reasonably sure your package will make it on time:


Our last shipping day before Christmas is Friday the 21st (final cutoff at noon Eastern time!), and we'll be back in the office Thursday the 27th.

Hope you're having a fun season!  Thanks for all your wonderful early shopping so far – that sure makes my life easier.

A thing, ready now on Shapeways and coming soon to this site.

This is the work in progress:

I'm sorry to be a Faceboox weenie, but I am one: more frequent updates are here.

A new biomorphic design.  There is a dodecahedral structure underlying this, but it's not very easy to visualize what's going on in there.  This makes me nervous so I rendered it cut in half to get a better look.

The opening is tomorrow evening.  If you go, you'll see a large 3D print.  I can't be there, but if you're in Vancouver could you take a picture for me?

A pendant in honor of the big cement guy.  I'm convinced that this new high-resolution steel printing process is going to be a thing.

I pushed a new design.  We had a snafu at the metal printers and it took a few months to get this straightened out, but now I'm happy.

I'm such a dope – I just realized there should be Klein bottles with things written on them.

Meanwhile the Rygo has made it to Vancouver: 1300 kg of air freight.  It will be installed at the VanDusen Botanical Garden, the opening is July 26 at 6:30 PM.  Please note also that it has a blinky light in the center now.

This was printed by D-Shape.  Click through to see it full-size – worth it!

Last January we attempted to crowdfund the production of this, and although the crowdfund failed, genius promoter JF Brandon made it happen anyway.  The piece is destined for Vancouver, and with a little luck will debut at Vancouver Maker Faire on June 23.

There are Klein Bottle pendants.

They're printed in high-resolution stainless steel – not the usual composite of steel and bronze – at fcubic in Sweden.  Why yes, I am stoked that these worked out !

I put it on Shapeways, and I made an Instructable about how it was designed and finished.

Just a few quick updates.  I added Priority Mail as a shipping option.  I finally documented that widget I made last year and put it on Shapeways (as well as a smaller version), it's about $40 total).  I also added it to The Pirate Bay's new Physibles category.  I think they may be jumping the gun a little in thinking this will have much effect in subverting traditional manufacturing any time soon, but who knows what the future holds?  It feels right to be there.

I did another silly project, this one for ceramic printing.  This one hasn't been built yet either, and...well, I suppose it probably won't work.  This is what it would look like:

Almost forgot: I have a new mini sculpture.

The full-sized one has to wait a few more weeks, I have a print but when I saw it I felt the file needed a tweak.  I made it a little too simple.

Sometimes in winter I do a silly project.  This year's hasn't been built yet, it remains to be seen whether it will work.  If it does, it might look like this:

When to order to be reasonably sure your package will make it on time?


Our last shipping day is Thursday the 22nd, and we'll be back in the office Monday the 26th.

* Express Mail International shipments aren't time-definite, and they depend on where you are.  This is only my best guess.

The Mini Beebo baby toy finally made it to store shelves.  Since this is its first Christmas many retailers are out of stock, but Toys R Us says they have some.

Clouds are gathering.  This year's clearance sale will start soon.  Could be as early as Thursday night.

I forgot to mention that I made a hypercube pendant.  OMG! 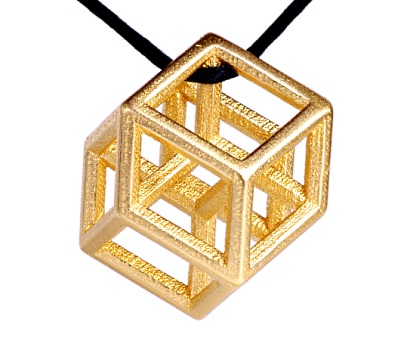 I also put up this design, which is now celebrating its 20th birthday.

That piece I designed in April printed like this:

I think it's not quite finished...but it's close.

The first biomorphic mini is up.

Hedgehog or cheese-grater?  Now you can have both.

This isn't a real update – I'm working on something that I can't talk about until it's finished – but just to say that I've collected up the pendants onto their own page, and I put up some photos from a commission that I did a few years back.

I just sent a new piece to be printed:

I spoke at the closing session of the annual meeting of the National Council of Teachers of Mathematics.

Then I played some Bach and spun LED poi.  They were a lovely audience!

I put a couple of metal-printed pendants on Shapeways.

I don't usually announce Shapeways updates here, but my own samples of these just showed up today, and they're so nice I'm thinking I should carry them on this site too.  Anyway, they're available now in gold plate, antique bronze (not plated) and steel finish.  This photo shows the matte finish, I haven't tried the glossy.

Sorry about the price bump on the new minimal-surface pendants.  My suppliers adjusted without warning and I have to follow – such is life on the cutting edge.

A new piece.  I'm not sure I want to talk about it.

Two new pendants are up.  Pretty much the most adorable thing I have ever experienced: math, yet kawaii.

The snap-fit construction that I designed last month has been verified.  It works!

I tweaked it up and rendered it out.

I'll release the design after the SME Rapid conference, which is in late May.